This guide will help you understand the basics of solar power and hopefully provide you with enough information to ensure you get the right size solar power system at the right price.

Most solar panels on the Australian market are going to be either monocrystalline or polycrystalline. 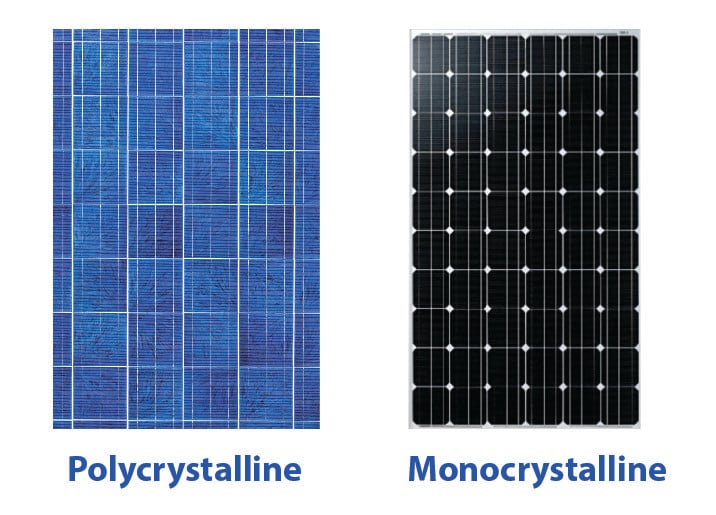 There is little difference between these two types of panels as far as performance goes, what is important is the quality of the build and the warranty.

There are many different variations in quality in both monocrystalline and polycrystalline panels, some of the low-cost budget panel brands can perform ok, however, be wary of the cheaper brands with obscure names, its best to stick with the well-known brands. Good quality panels should last at least 25 years, some of the cheap and nasty ones can burn out in under five years. Paying less now can mean spending more later.

Both monocrystalline and polycrystalline panels are a good choice with little difference in performance between the two.

Check out the links below to solar panel reviews of many of the top brands sold in Australia. Any of these are considered reputable however they do range in price and performance.

The second principal component of a solar power system is the power inverter. There are two main types of inverters, central inverters and micro-inverters. 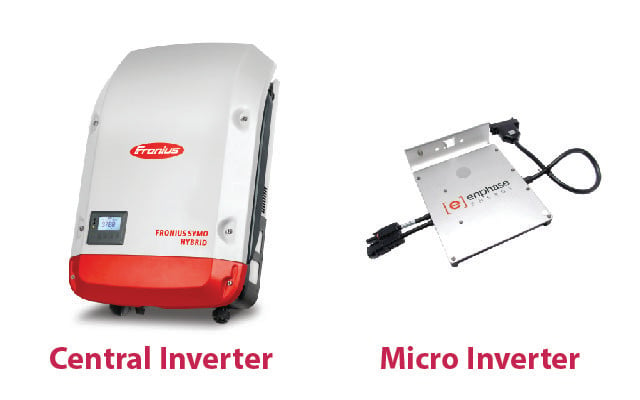 Microinverters are much smaller than central inverters and are usually mounted very close to the solar panels, one micro inverter is required for each solar panel in the system array.

A central inverter is usually mounted on a wall out of the weather and often close to your home's grid-connected meter box or main switchboard.

It's a good idea to mount a central inverter in a cool well-ventilated place as they do generate some heat. Continually running at high temperature may shorten the life of the inverter.

Microinverters can optimise the power output of each solar panel individually resulting in more system power overall. They are also safer because they run at lower voltages.

Microinverters are more expensive to buy, however, depending on how you use your power this may be irrelevant in the long run and may work out cheaper with a faster payback time.

The role of the inverter is to convert DC electricity produced by the solar panels into 240V AC electricity that most home appliances use.

It is most likely that the inverter will fail after 10 or 15 years use well before the solar panels will. If you are building a solar system on a tight budget, it's recommended to install a high-quality inverter if you can rather than high-quality solar panels.

Below is a chart showing some of the most popular solar inverters in Australia 2017. There are many more brands available, the ones listed here are the most common and will likely be included in a solar quote.

All of the above solar inverter brands a reputable and well supported by their manufacturers. The brands on the right are the top end of the market and the most expensive, to the left are the more fordable brands.

Its recommended installing solar panels that have 33% more combined total power rating than the inverter. For example, if the inverter is rated at 3kW, install 4kW worth of solar panels. This will give you 33% more from the solar rebate with the bonus of getting more power from the system in winter and earlier and later in the day. Also some power companies place restrictions on the size of grid-connected inverters.

What are your expectations a solar power system?

Before you install a solar power system it is essential to measure how much electricity you use and at what time of day you use it, these factors will have a significant impact on how much economic benefit you can get from your system.

If your home is unoccupied during the day and all its appliances are sitting idle, any solar power generated will not be used. This is often overlooked by first-time solar owners.

To get the best value from a system its best to use as much solar power as possible, either consume it during the day when the sun is on the panels or store it in batteries and use it at night.

Feed in tariffs have become pathetic these days sitting at around 6-10c for each kWh exported to the grid, why pay thousands for a quality solar power system and then get paid such a reduced rate, Use as much of your solar power as possible this will give you the best value and fastest payback time.

High energy consuming home appliances like dishwashers, washing machines, cloth dryers and electric hot water systems can be set on a timer to run during the day using only solar power.

Shop around for the best feed-in tariff rate as they can vary between electricity retailers from 0c to 12c.

The solar rebate is a point of sale discount you can claim on a system and is worth close to $650 per kW of solar power installed. A new 3kW system can include $2,100 in rebates.

Claiming the rebate is not a one-off offer, you can request again for another system.

Sadly, the solar rebate will not be around forever and is being phased out, beginning in January 2018 there will be a 7% reduction which will continue every year until reduced to zero.

Before you get a quote for solar take the time to fully understand how much power you use and when you use it, most power bills do not show this data however your electricity retailer may be able to provide you with a more detailed half hourly usage chart if requested.

Most solar panels are installed in a fixed position on a roof, as the sun moves across the sky the output from the panels will vary at different times of the day. In the morning east facing panels will generate more electricity than west facing panels, and in the afternoon this is reversed.

North facing panels will make the most power in the middle of the day and overall produce more electricity than west or east facing panels.

If you have a large roof, then you could install east-west and north facing panels and get good power output all day. Talk to your installer, decide what time of day you want the highest production and have the panels mounted accordingly. Changing the angle, later on, should not be a significant problem but will come at some cost.

The latitude of your location can calculate the best angle to mount solar panels:

A flat roof can cause problems with dirt build up around the edges of solar panel frames, the best workaround for this is to install frame-less panels that allow water to flow unimpeded straight off the edge taking any dust with it.

A good quality solar system will have a payback time of 4.5 to 6.5 years. It all depends on when and how much electricity you use, The more of your self-generated solar power you consume, the faster the payback time will be.

The solar market is always changing, bargains come and go, a good system with Tier 1 panels, a good brand of an inverter and with the solar rebate included will cost:

Every installation job is different, so extra costs can come into play like switchboard upgrades or if the install location is difficult to access maybe a crane will be needed to get the panels up on the roof.

Choosing to install a micro inverter system can increase the total install price by around 20%.

If you choose a battery energy storage system as is the case with an off-grid or hybrid system, then expect to pay double the above.

This is probably the best tip on this page, so it deserves caps - CHEAP SOLAR POWER SYSTEMS ARE EXPENSIVE!

Solar Energy Storage - is it worth it?

Right now in mid-2017 battery energy storage systems are expensive, to add 10kWh of energy storage to an existing solar system will cost close to $10,000 providing a payback time of 15 years. However, the warranty on the batteries is only ten years so they will most likely fail before they pay for themselves.

Compare the above to installing a non-battery solar system with a payback time of 5 to 8 years and a service life of 25 years.

The price of batteries is falling fast, and the market is very competitive with some big dollars going into R & D. In a few years from now batteries will become economically viable.

A good starting point for any first time solar buyer is the SolarQuotes.com.au website, this site is packed with all the information anyone could ever need to know about solar.