MYTH: Subsidies for solar and ‘green schemes’ are why electricity bills are going up.

FACT: Subsidies for domestic solar power account for only around 6 per cent of the average household electricity bill now, and this is forecast to fall by 2020.

The cost of deploying renewables across Australia is just a small proportion of electricity bills. By far the most significant component of electricity bills is network costs (40 to 50 per cent of bills) – that is, upgrading transmission and distribution infrastructure such as poles and wires to handle rising peak demand and replace old equipment. 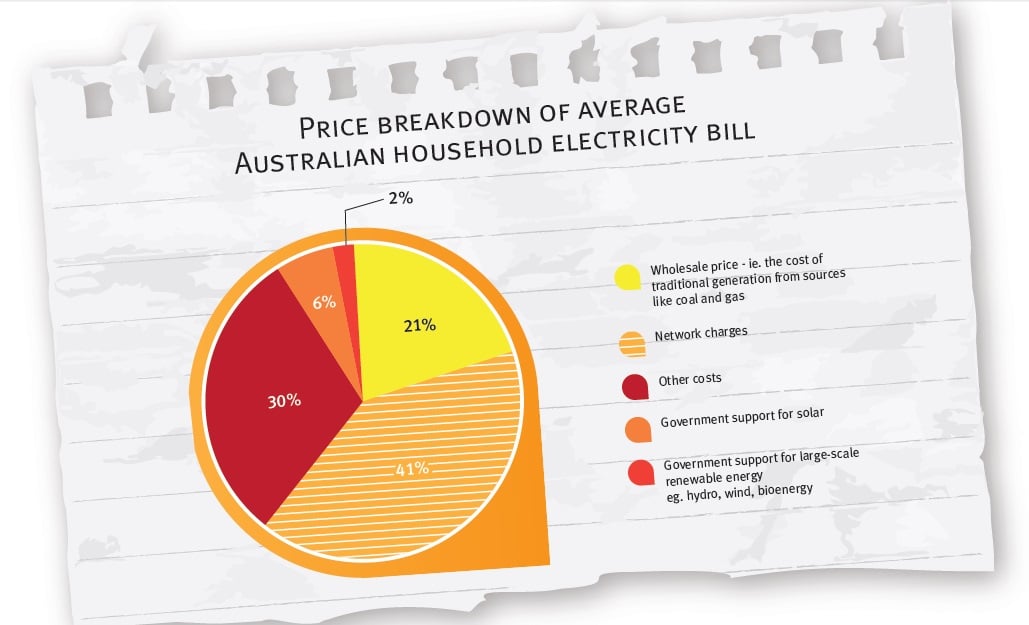 The growth in ‘peak demand’ – those few times a year when demand for electricity is the highest (usually the hottest few days in summer) is a significant factor driving up costs. More houses, more air conditioners and other gadgets, all being used at the same time for just a few hours a year, puts enormous strain on the system. To avoid blackouts during these few hours, we need to build extra power plants – at a considerable cost. This is the real issue that Australia needs to confront if we want to stop power price rises.

The next most significant component of electricity bills is the wholesale price of electricity (20 to 30 per cent of bills). Solar is an insurance policy against rising costs.

FACT: Solar panels are an increasingly affordable option that will save households money in the long run.

The cost of producing and installing solar power systems has fallen dramatically over recent years and continued to decline. The solar panels installed on rooftops today are more than 500 times cheaper to produce than the first solar cells of the mid-1950s and costs are still coming down fast. Four years ago a solar system could cost as much as a small car; now it costs about the same as a big TV.

But how does solar compare to traditional energy, such as coal and gas?

If you count the cost of setting up a fossil-fuelled power source by including the return on investment, operation costs, fuel and maintenance over its entire life, solar is close to the value of fossil fuel-based energy and will be the cheaper option within a few years.

FACT: The solar industry is well regulated and safe.

Solar panels and inverters (the component that converts the power generated by the panels into a form compatible with the electricity system) have to comply with the relevant Australian Standards, and every solar installer must first be qualified as an electrician, and then undergo additional training and accreditation in solar systems.

The Clean Energy Council has a free consumer guide on its website to help people ask the right questions of their solar installer and get a quality product and installation.

MYTH: Household solar is just ‘tinkering around the edges’ of the electricity market.

FACT: Household solar is helping to reduce our overall demand for energy.

In mid-2012, the Australian Energy Market Operator revised its annual forecast for energy demand down by 5 per cent, driven partly by the increased uptake of rooftop solar power as it acts to reduce overall demand.

Federal Energy Minister Martin Ferguson and others agree that this trend of declining demand is suppressing wholesale electricity prices which, roughly speaking, are around half of what they were five years ago.

FACT: The need for grid upgrades is driven by rising peak demand and insufficient investment in the electricity network over the last 20 years.

The single most substantial reason for rising power bills is the cost of upgrades to transmission and distribution infrastructure (for example, the poles and wires which in some cases are decades old). This makes up about 40 to 50 per cent of the average household power bill and would exist with or without the addition of solar power systems.

The call on our electricity supplies at peak times during the day and year (for example, on hot days when people come home from work and turn on their air conditioners) is a crucial driver of power price increases. This is known as ‘peak demand’, and it’s getting worse thanks to population growth and the rising use of energy-hungry appliances. It is estimated that 25 per cent of retail electricity costs are created by peak events that occur over less than 40 hours per year.8 Meeting
this demand requires an enormous investment in infrastructure that is sometimes only turned on a few times a year.

On rare occasions in some remote places, network upgrades are needed to handle solar. But in most areas, solar can be connected to the grid without requiring network upgrades.

FACT: Cutting emissions is just one of solar’s benefits.

Solar power helps households offset the impacts of increased electricity prices resulting from a price on carbon, while many other cheaper forms of carbon reduction do nothing to help families adjust to the effects of the carbon price.

Compared to the Commonwealth’s $23 per tonne carbon price, the effective cost per tonne of reduced carbon emissions through small-scale solar power can look expensive. But the two things are not the same. Solar energy does two things: it reduces emissions and produces electricity, whereas under the Commonwealth’s scheme a company can purchase a carbon offset which diminishes global emissions but does not help supply Australians with power.

The solar power industry brings another benefit: it supports a lot of local jobs.

When viewed holistically solar stacks up well as not just a method of reducing emissions, but of simultaneously providing other social and economic benefits.

MYTH: Solar can only ever make a small contribution to our energy needs because it doesn't produce power at night.

“It is becoming apparent that electricity consumers are changing their energy use in response to rising electricity prices, adopting energy efficiency programs and the installation of rooftop solar photovoltaic systems,” AEMO Managing Director Matt Zema has said.

The Federal Government’s Energy White Paper, released in November 2012, projects that by 2035 solar PV will provide 17 per cent of Australia’s energy and 29 per cent by 2050.

Already, over one million Australian households have solar panels installed, a number that will continue to grow as prices become more and more competitive. This goes to show that solar is already a mainstream part of Australia’s energy mix.

The energy market in Australia is not a level playing field. The fossil fuel-based electricity system we have today is built on government subsidies, and fossil fuels continue to enjoy government assistance. For example, the Tamberlin Inquiry in NSW revealed that the government-owned Cobbora coal mine sold coal to power stations ‘at cost price’ (roughly 30 per cent of the price paid by other generators on the open market), which meant that: ‘...State-owned generators and gentraders [had] access to coal at a lower price than would have been available to them had they had to source such coal through a tender process.’

This amounts to a subsidy of around $4 billion over the life of the contracts, and it is just one example of where taxpayers are footing the bill.

On top of that, fossil fuels have been subsidised by not having to pay for the greenhouse gases they produce, and for the other health and environmental impacts they cause.

An analysis published in the American Economic Review calculated that the economic damage caused by air pollutants from coal burning (regarding health impacts and local pollution) exceeds the value of the electricity produced.

MYTH: All the solar panels are made in China, so there are few Australian jobs in solar.

FACT: Thousands of Australians are employed in the solar industry

It is true that most of the solar panels in Australia are produced overseas. However, there are thousands of Australians employed in the local solar industry. It is estimated that there are 39 jobs directly supported in Australia for every 1 megawatt (MW) of solar installed. In 2011, 500MW was introduced, taking the national total to over 1000MW. This equates to around 14,000 jobs.

MYTH: We need significant breakthroughs in solar research and development to push the price down further, so government subsidies in Australia make no difference.

While there have been some crucial technology breakthroughs over recent years, the primary driver for the current cost reductions in solar has not been technical, and it has been a result of competitive pressures and economies of scale.

An independent report from the University of Melbourne confirms this assessment: Photovoltaics (PV) and wind power have historically shown that a large proportion of cost reductions have come from the increased knowledge and economies of scale associated with large-scale global deployment – not just improvements in technical efficiency.

In other words, winding back or shutting down government assistance in Australia will not have much impact on the global price of solar panels, but it will have a substantial effect on the local installation costs by affecting the scale of the industry and therefore levels of competition in the market.

The suburbs with the highest percentage of solar installations are overwhelmingly low- to middle-income suburbs and places with a high proportion of retirees. These are the households that are the most concerned about rising electricity prices.